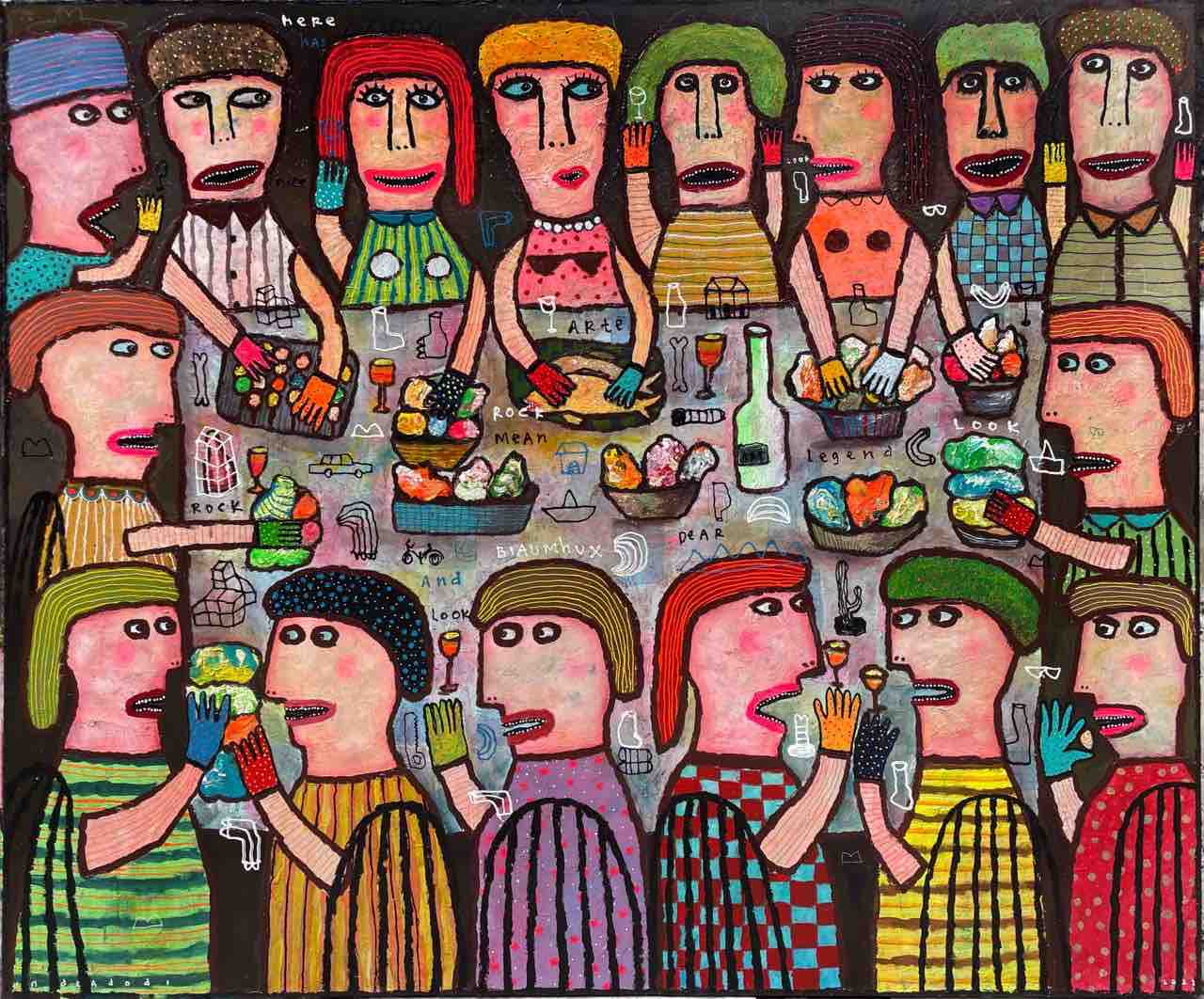 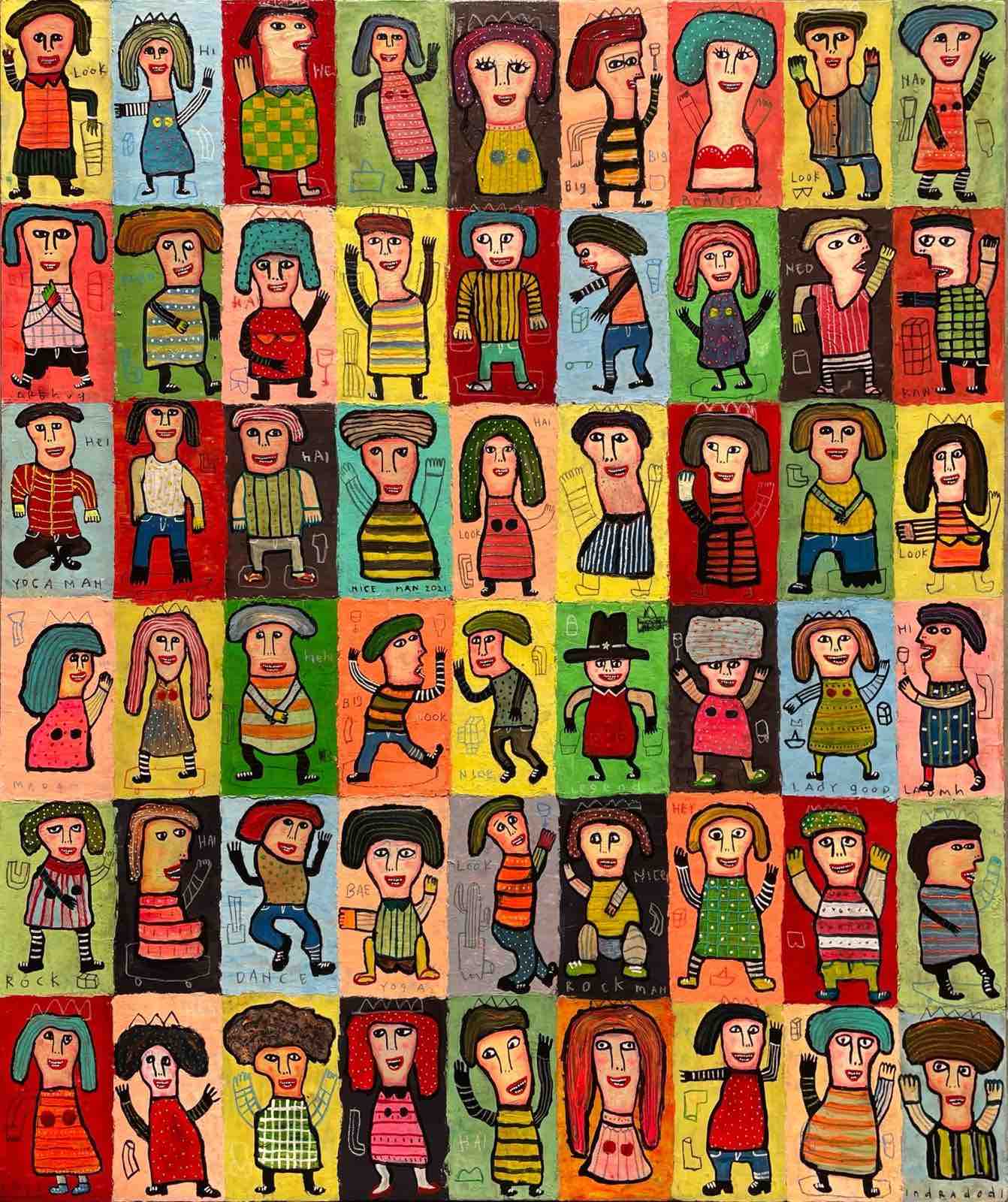 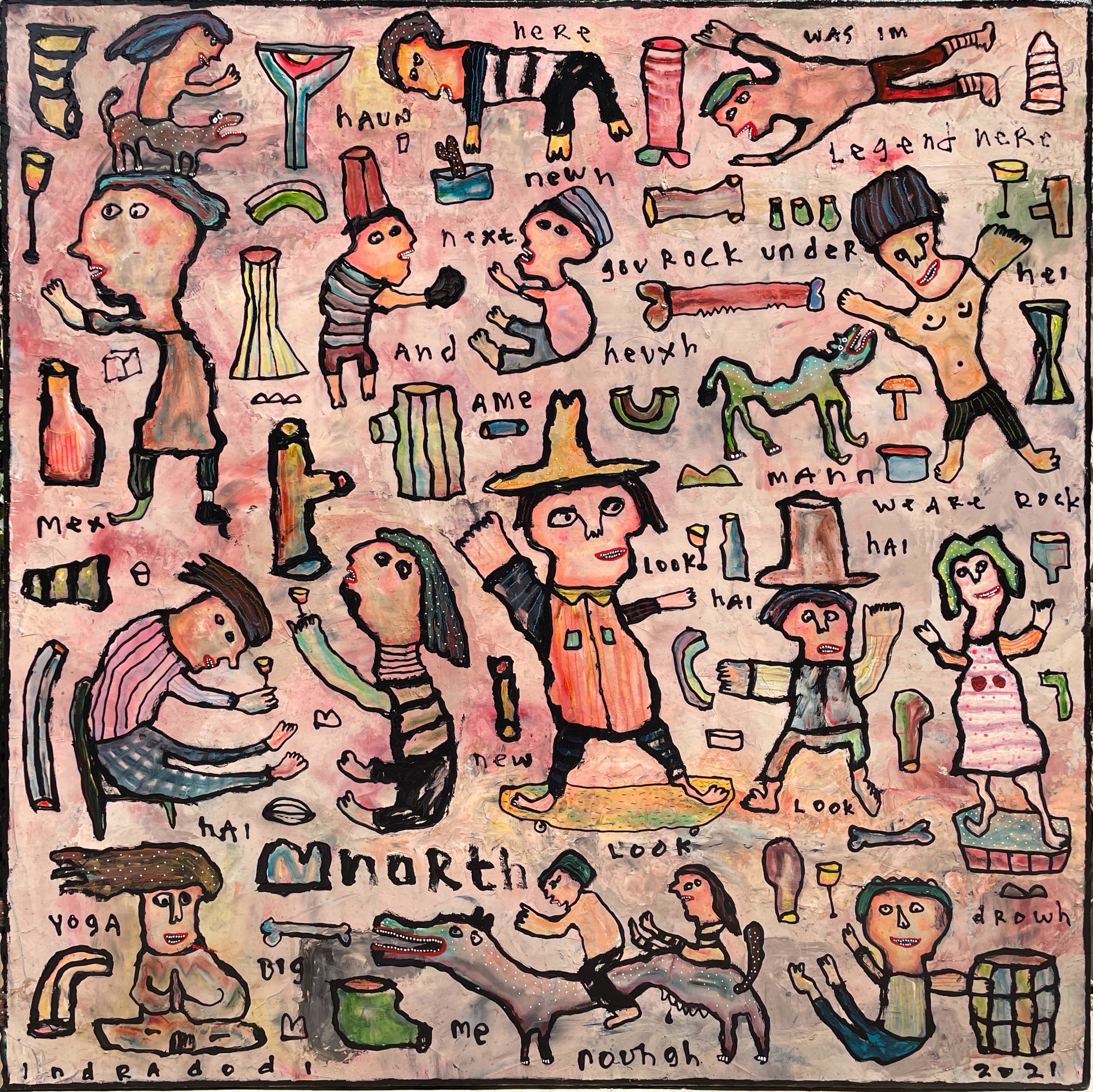 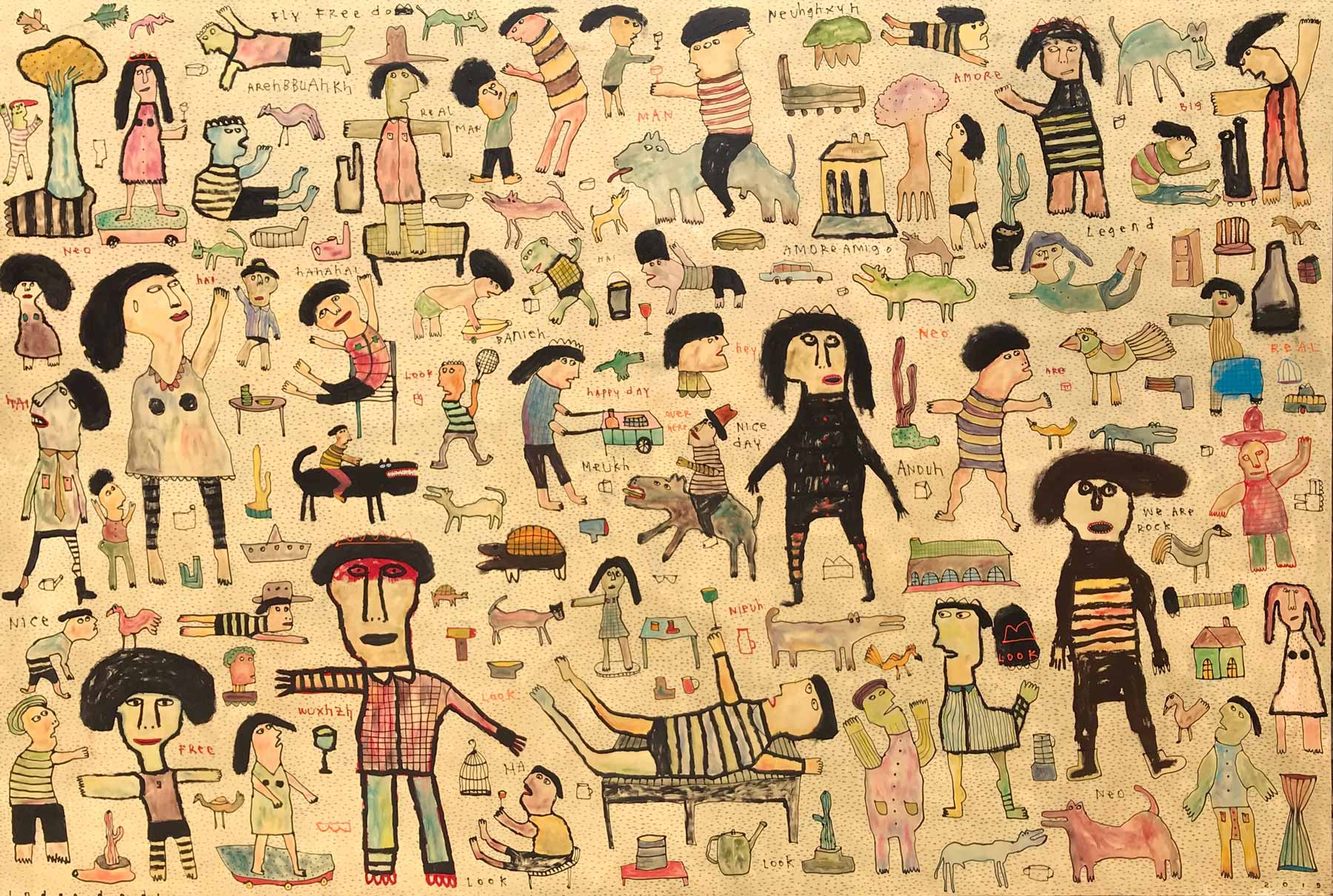 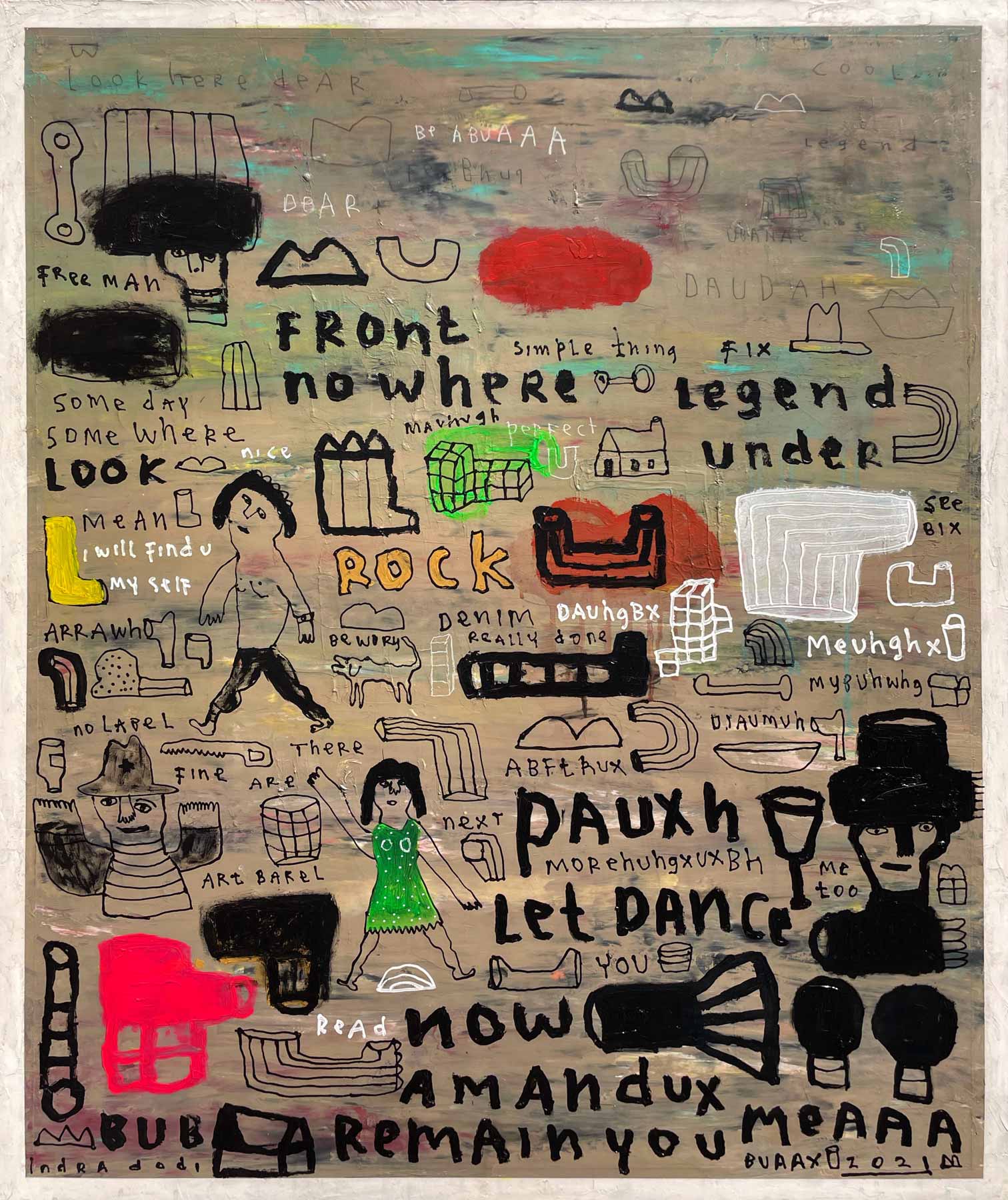 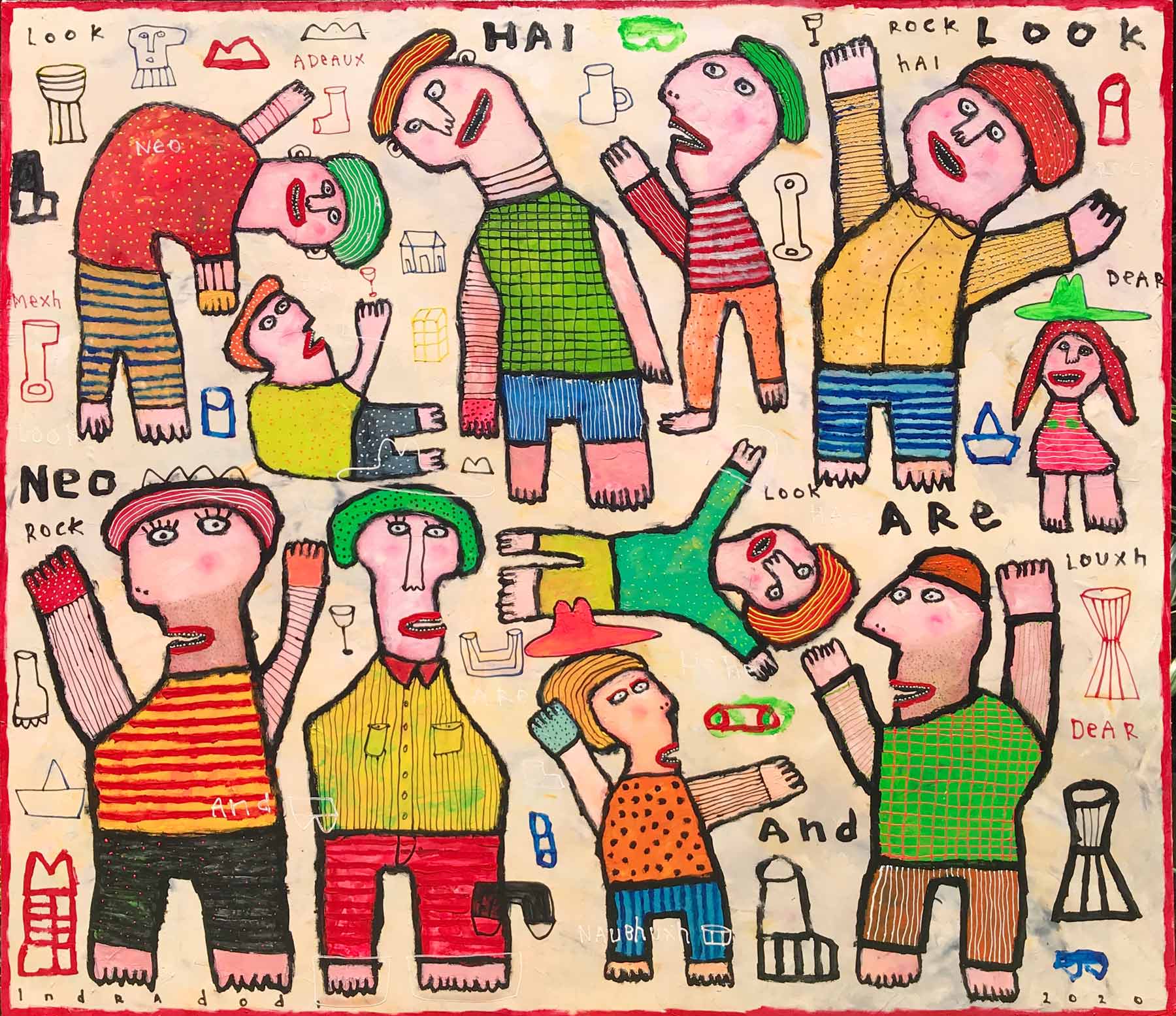 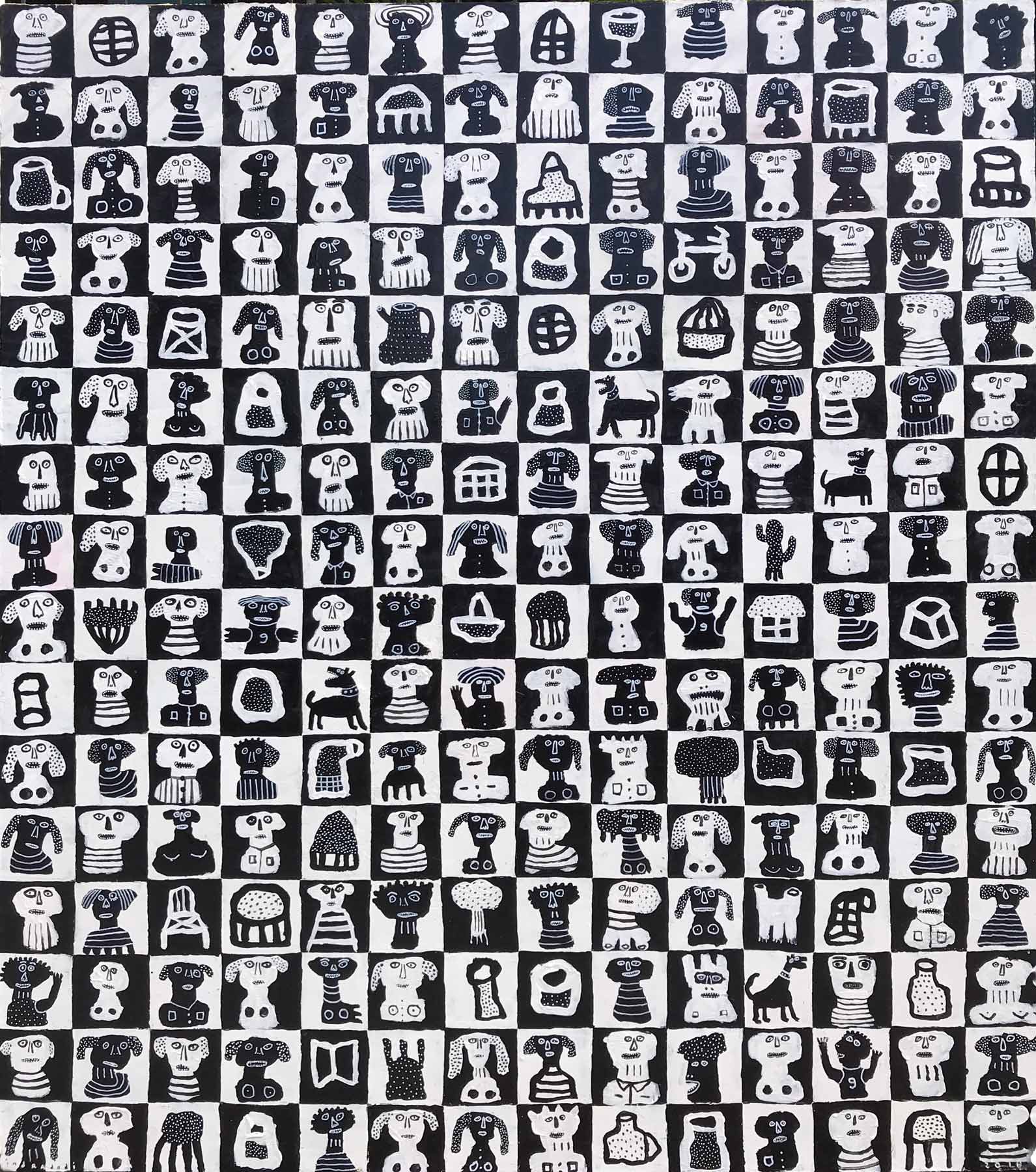 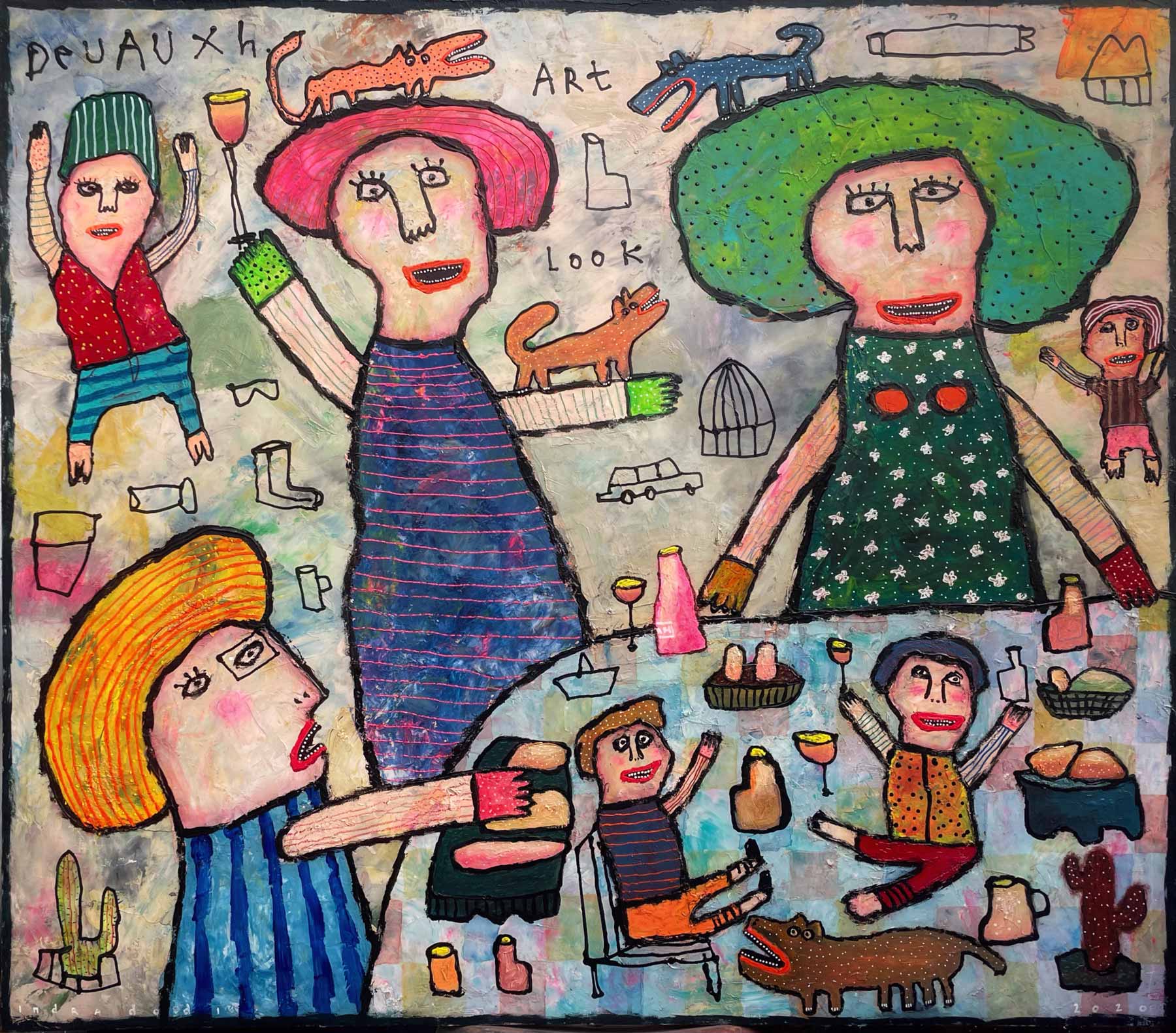 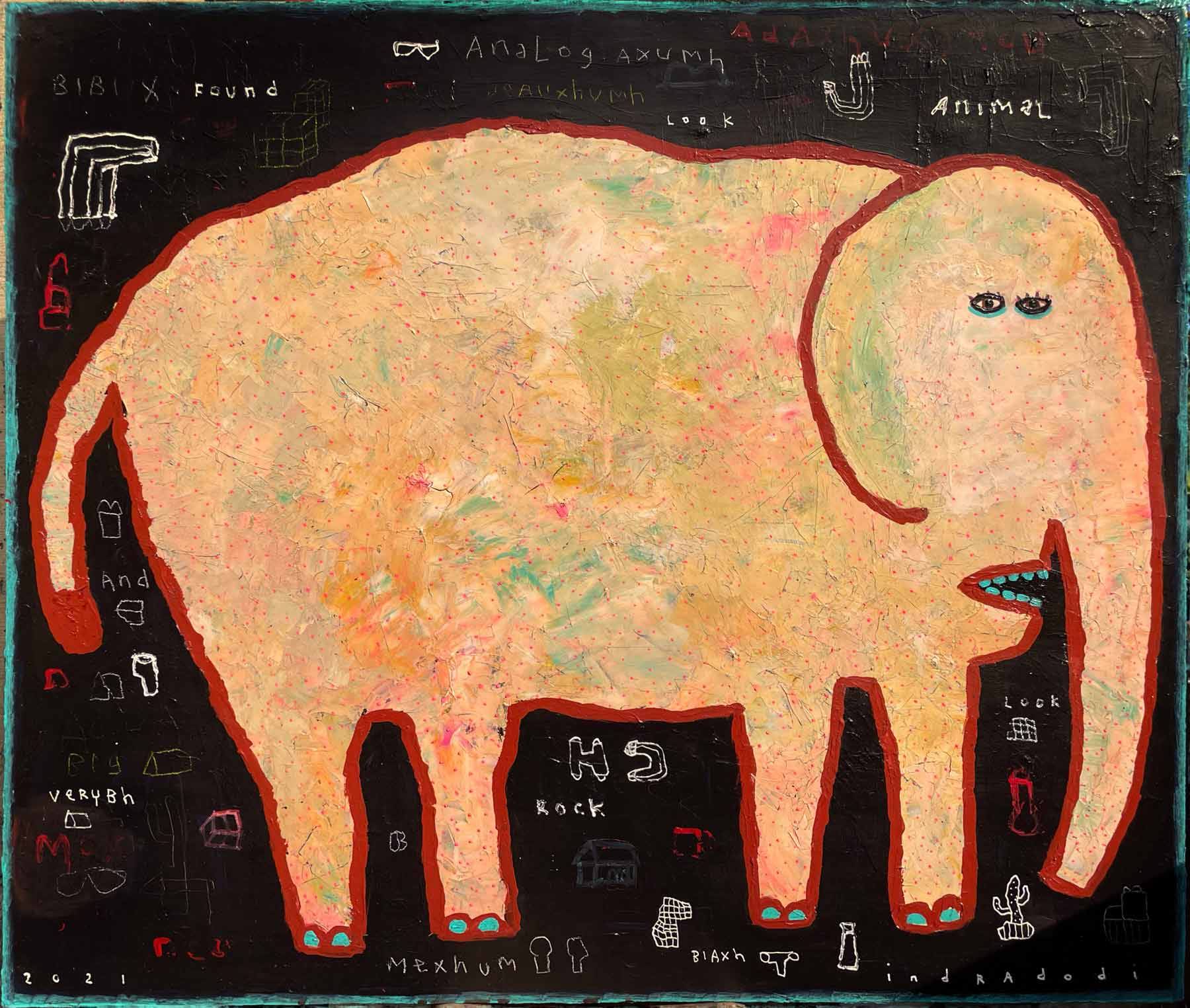 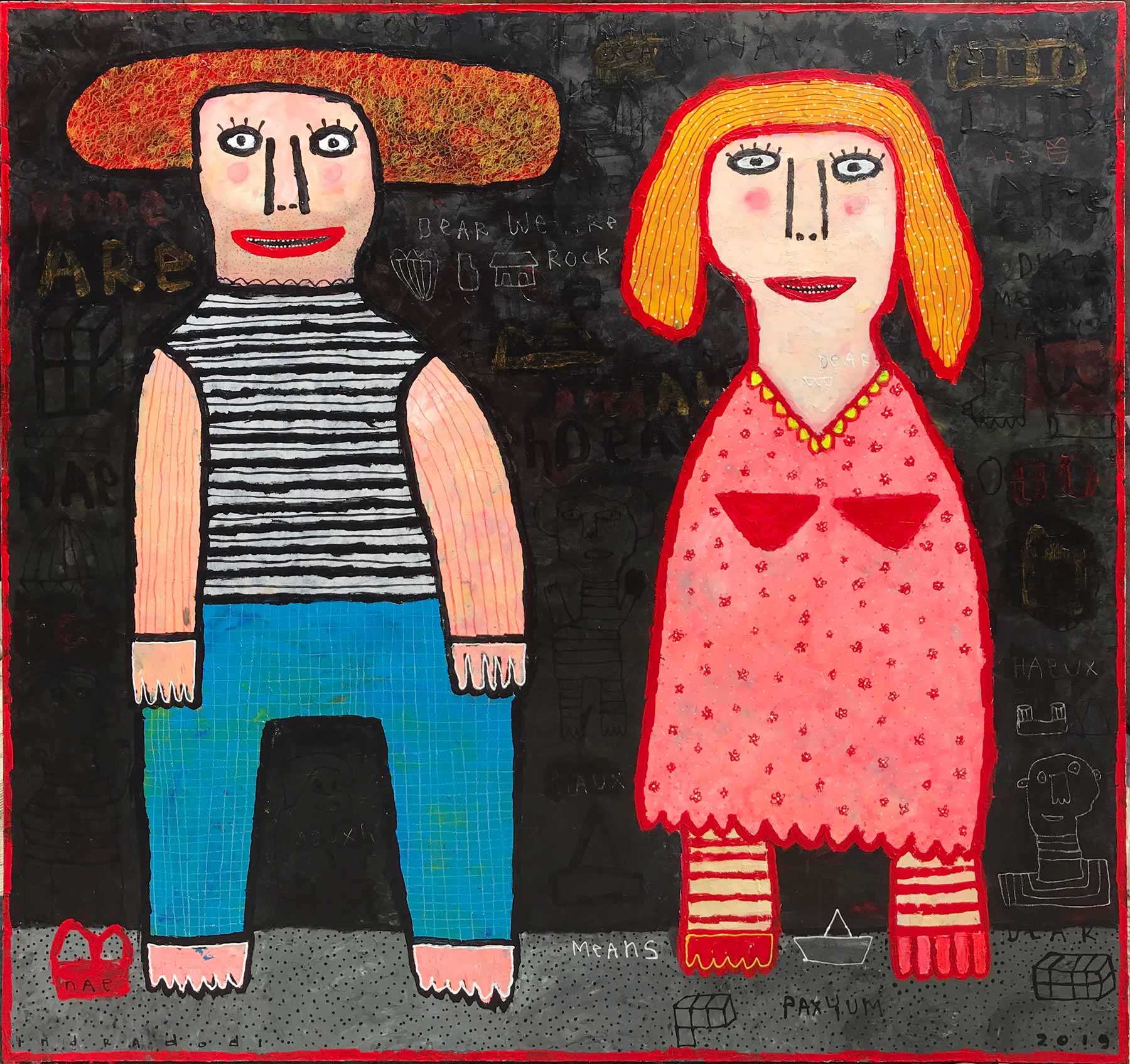 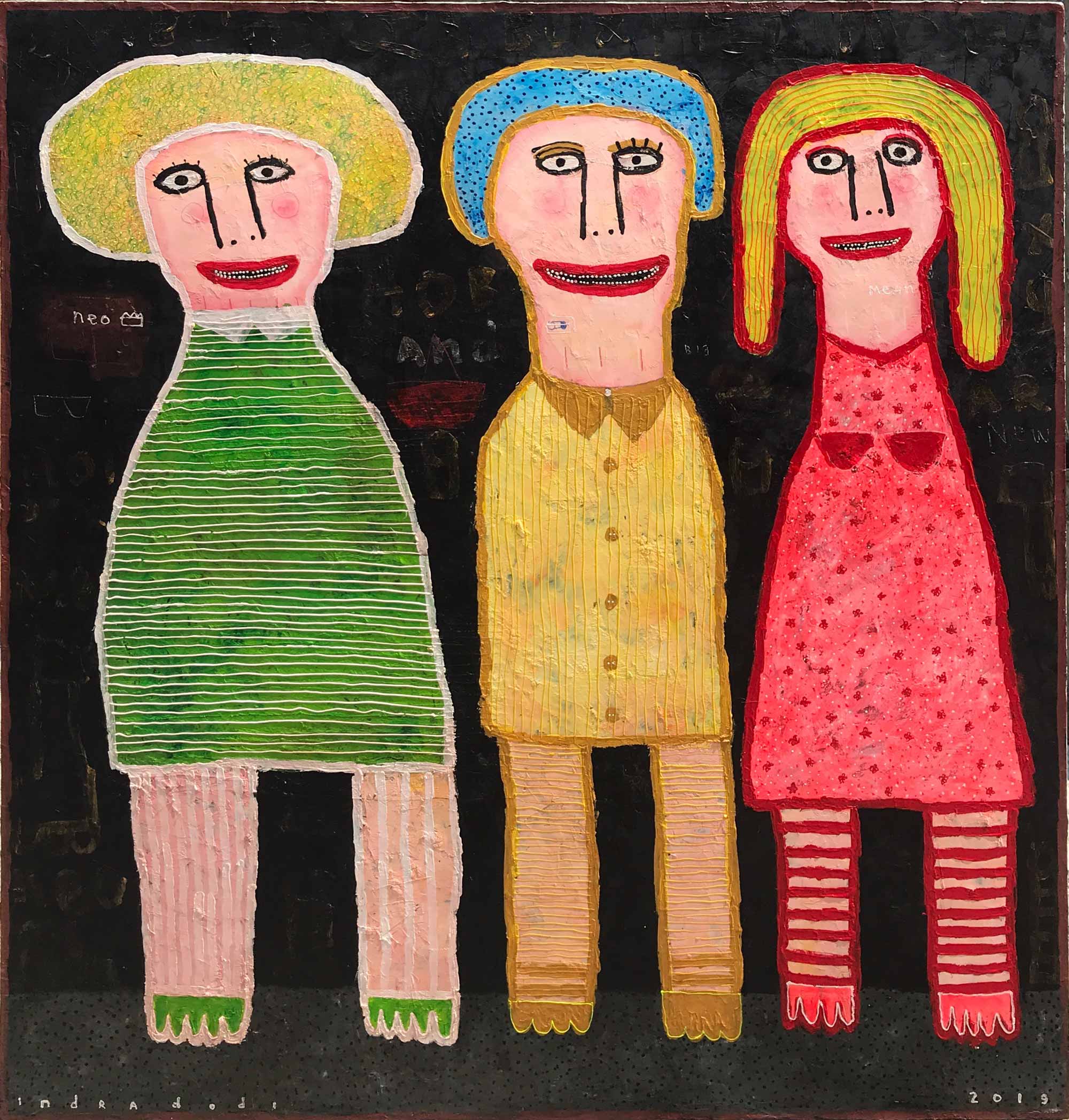 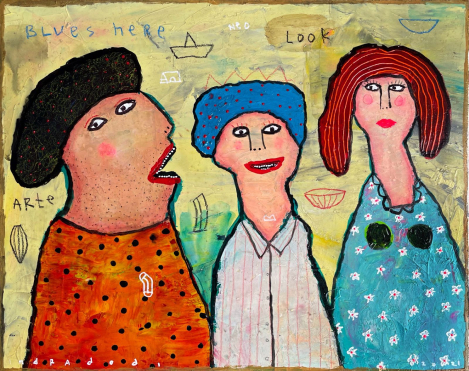 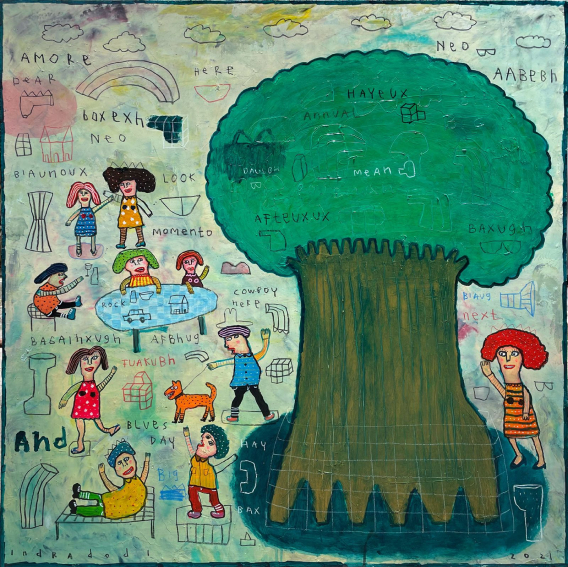 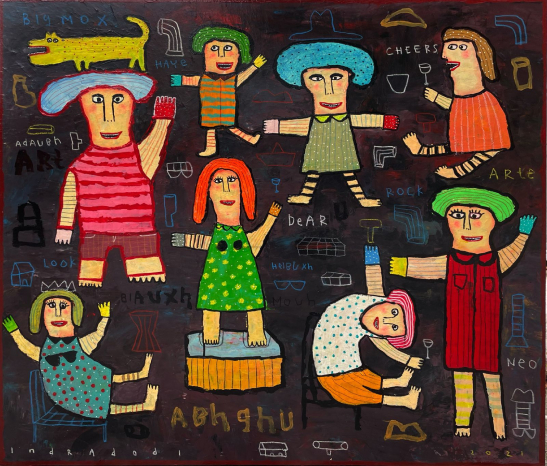 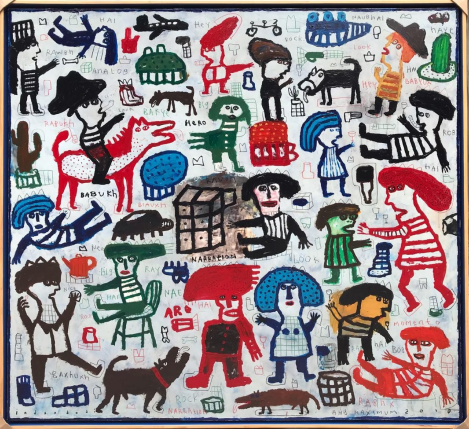 When he first came to Yogyakarta in the year 2000, Indra Dodi started to learn painting from his uncle who happened to be a painter. From the year 2005 on he studied in the Faculty of Fine Arts (Painting) at the Indonesian Institute of Arts (ISI – Institut Seni Indonesia) in Yogyakarta.

In the beginning, he went through several styles and techniques, including realism and expressive painting, until he found a lot of freedom in abstract painting, where he could explore his feelings and exercise his spontaneity. This sense of freedom and inner liberation has certainly influenced his later paintings and helped build his self-confidence.

Since the beginning of his artistic journey, Indra has always considered painting to be a very serious activity, requiring a lot of personal commitment, technical skills, knowledge, energy and imagination. But it is also fun and playful, something he wanted to see finally represented on the canvas, too. This sense of fun and play provides one of his sources of motivation for his artworks. Indra is of the opinion one needs to learn to close one’s eyes and to return to a childlike mentality to find the source of artistic creativity, which is an expression of our inner self.

Today, he watches his children play and finds inspiration in their ways of learning how to cope with this world that is new and still unknown to them. These have cumulatively contributed his adoption of naïve figurative paintings as his current style.

Indra likens art to play and thinks human beings should spend some time to play around. Responding to a playful impulse means following a truth from inside. Art, to him, is just copying that. Beauty is a truth that has to be trusted as a true expression of the soul. The best outcome would be, if this energetic fun part of art-making could be recognized and appreciated by viewers. Art would then generate pleasure for both, artists as well as observers.

Reality, for Indra, can be something quite fierce and frightening, but at the same time exhibits its paradoxical sides, with funny and humorous aspects. Life is not one-sided. Indra tries to catch moments, like a photographer taking snapshots with a camera, and these moments are saved in his memory, finally evolving into stories that are painted on the canvas. The stories can be taken from an event in daily life, from reality or something imagined. It could be a chain of accidental events, maybe unrelated and unpredicted.

Each of his paintings is a message of a rebellion deep inside of him. Why must objects be a specific color? Why we do have to always agree? Why not oppose? etc. What Indra still feels is an inner disquiet, and the wish to escape.

These scenes from daily life contain elements of comedy and drama, emotions and mysteries. It could be compared to movies, showing in their plots the variety and facets of human life. People are often struggling with their emotions, ambitions and aspirations. Sometimes people succeed, at other times they don’t. Success and failure, to Indra, is a steady cycle of changes we are confronted with. Emotional conditions like happiness and sadness are two sides of the same coin, like beauty and ugliness, and all of it is human.

The faces visualized in Indra Dodi’s portrait paintings tell their own story. Life is engraved into the features of human faces and bodies. The physical appearance is a metaphor for psychological states, exposing the specific characteristics of a person and their attitudes. Facial and physical expressions reflect their biographies; people can be tall or short, fat or thin, in any case, what makes a difference are their expressions.

Generally, abstractions in his current work are a condensation of multiple metaphors. Exaggerating the monstrous or ugly aspects reveals the real nature of humans as well as that of animals and imaginary creatures. In his painted stories – which Indra considers to be more like visualized poems – many different objects/items appear, for example weapons like swords, daggers and pistols, and even skulls. Ferocious-looking dogs flashing their teeth and some other grim creatures can be seen intermingling with scenes of daily life. They are just part of the totality, referring to the darker side of life. All these scenes are a subjective view, more like a colorful kaleidoscope, changing their shapes and structure when being moved. Horses, dogs, snakes, elephants, cows, and certainly the cactus (which is thorny) are part of this world. Sometimes even humans look more animal-like.

Indra Dodi looks at things from a view different from the conventional. His paintings are a different way of speaking about reality or to tell things from his own perspective, such as the environment, villages, society, stones, mountains, rivers, rain, clouds, partying, love, being drunk, women, children, land, language, alphabets, etc.

Finally, Indra has developed and found his own visual language. The narrative structure is open to interpretation, and there is still much left to the imagination of the viewer. Written words or letters sometimes turn up on the canvas, objects connecting with the text. Most of the text consists of words that cannot be understood. They are not supposed to have meaning, merely visual elements, but at the same time, they speak about the text and images. Lines of letters flow like a river and colorful letters are blossom like in a flower garden. The epic and narrative structures appear to have transformed into fantasies. It is, in essence, visual poetry.